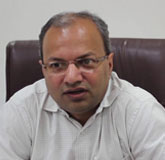 Dr. Manindra Agrawal being a professor at the Department of Computer Science and Engineering, is also the Deputy Director at the Indian Institute of Technology, Kanpur.
He was also the recipient of the first Infosys Prize for Mathematics and the Shanti Swarup Bhatnagar Award in Mathematical Sciences in 2003. He has been honored with Padma Shri in 2013. In September 2008, Agrawal was chosen for the first Infosys Mathematics Prize for outstanding contributions in the broad field of mathematics.