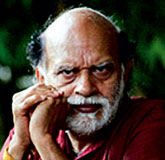 Born in 1956, Krishnamurthy lives and practices theatre in Heggodu, a small village in Karnataka. He has born and brought up in a family of traditional Yakshagana performers. He has appeared on stage as a child artist in the play ‘Panjara Shale’ directed by Sri B.V.Karanth at Ninasam Heggodu. Since then he was associated with Ninasam Cultural Organization for more than 15 years where he got exposure to theatre in various aspects. Through Mr. K.V.Subbanna, he learnt the meaning of theatre, its social relevance and the responsibility. He was the first student of Ninasam Theatre Institute Heggodu when it started in 1980. He has completed his 3 years Graduation course in Theatre Arts at National School of Drama New Delhi (1981-84), specialized in Direction and enriched his knowledge and experience. He awarded fellowship from NSD for one year to study ‘Many Styles of Folk performing Arts in North Karnataka’ under the supervision of Dr. Chandrashekara Kambara. He studied and practiced ‘Sannata’ form in that period and later he used it in modern context. When Ninasam started seasonal repertory ‘Ninasam Tirugata’ in 1985 he joined the company as an Actor/play director and worked for 2 years. ‘Dushyantha’ in Loka Shakuntala ‘Hamlet’ in Hamlet, ‘Macheath’ in ‘Three penny Opera’ are some of the roles he acted. For the next one year he joined Ninasam Theatre institute to teach Acting.