Nishith Acharya is the Advisor to global organizations on innovation, entrepreneurship & commercialization 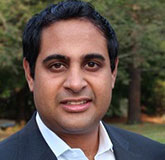 Nishith Acharya is the Advisor to global organizations on innovation, entrepreneurship & commercialization, consults with some of the world's leading universities, governments, foundations and companies to assist them with innovation, entrepreneurship and globalization strategies. Nish previously served in the Obama Administration, where he was appointed by President Obama as the Director of Innovation & Entrepreneurship and Senior Advisor to the Secretary of Commerce, and led the President's efforts to nurture economic growth through innovation, entrepreneurship and commercialization.
As part of his work, Nish managed the President's National Advisory Council on Innovation and Entrepreneurship – a group of nationally known investors, entrepreneurs and university presidents that inspired the America JOBS Act that legalized crowd funding. Nish also served as Executive Director of the Deshpande Foundation, a prominent American philanthropy focused on innovation, entrepreneurship and scalability around the world.
Nish was previously a Member of the Council on Foreign Relations, the Bretton Woods Committee, The Indus Entrepreneurs, and the Clinton Global Initiative, and a Board ember of Akshaya Patra USA and the United Way Worldwide Leadership Global Advisory Council. Nish also served five years as a Presidential Appointee in the Clinton Administration. Nish has been quoted in many major publications, including Forbes, the Economist, Boston Globe, the New York Times, the Washington Post, Asian Week, the Times of India, the Economic Times, the Financial Times, Newsweek, BCC and NPR.