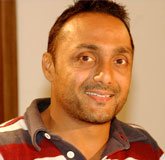 Mr. Rahul Bose started his acting career early, when as a boy of six he played the lead in his school play, 'Tom, the Piper's Son'. Today one of the country's most respected actors, his seminal roles are the ones in, 'English, August', 'Split Wide Open' (Best Actor – Singapore Film Festival), 'Mr and Mrs Iyer', 'Before the Rains', 'Kaalpurush' (National Award for Best Film across all languages, 2007) and 'The Japanese Wife'. 'Time' magazine called him 'the superstar of Indian art house cinema' while 'Maxim' (Italy), 'the Sean Penn of Oriental cinema'.
In recognition of this, two retrospectives of his body of work have been held – the first in Geneva in 2004, and the second at the Masala! Mehndi! Masti! Festival in Toronto in July 2007. As is widely known now, Mr. Rahul's social concerns occupy an equally important space in his consciousness. 2007 was a seminal year in his efforts at public service and philanthropy when he started his own non-profit organization, The Foundation, an NGO dedicated to the removal of discrimination from all walks of life. Aside from education and CSA, recognising that climate change is going to be the single most influential factor in the world, both economically and socio-culturally, Mr. Rahul is, as usual, ahead of the curve in India in strenuously urging the country to 'go green'. To this end he has strategically chosen two completely different initiatives. As Oxfam's first Global Ambassador from the Eastern Hemisphere, Mr. Rahul launched their India initiative on climate change in March 2009. This initiative focuses on government policy at the highest level along with advocacy of the same with international bodies, e.g. the United Nations. The second, more grassroots initiative is with Planet Alert, a multi-pronged campaign including, 'Green Runs' across the country, college interactions, mass media campaigns and a video blog as well as a written blog that Mr. Rahul personally crafts ever so often on www.planetalert.bigadda.com.
In a first for any Indian, Mr. Rahul was invited by the Climate Action Network in September '09 to deliver nine lectures in Canada to the South-Asian Canadian community on the global politics of climate change to raise awareness in the lead-up to Copenhagen in December '09. But the real feather in his cap was being selected as one of ten speakers to speak at the Global day of Action for Climate Change rally of 100,000 people in Copenhagen, at COP15, in December last year. Better still, he was asked to address the crowd again at the end of he rally.