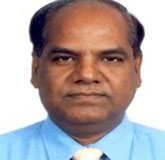 Mr. Ravindranath Venkatesh Gumaste, holds a bachelor degree in Metallurgical Engineering from Karnataka Regional Engineering College, Surathkal. Soon after graduating, he joined Kirloskar Oil Engines Limited in July 1981. Ever since his joining, he has been instrumental in effecting change, implementing systems and quality development in several departments such as Heat Treatment, Metallurgical, Quality Control, etc.
In 1993, he joined Kirloskar Ferrous Industries Limited and later rose to become the SBU Chief for pig iron business in the year 1998. In view of his pioneering efforts and initiatives to improve the performance of the company, such as cost reduction drive on all front, improvement in the production process, quality of output, negotiating for reduction in the raw material price, improvement of market share of the castings etc., he was appointed as Executive Director of the Company with effect from 25 July 2002 and further as the Managing Director of the Company with effect from 1 July 2003.
Mr. Gumaste was awarded SAMAJASHREE by the Indian Council of Management Executives, Mumbai in recognition of outstanding services rendered to the public.