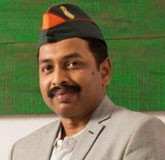 Naveen Nagappa pursued his childhood dream by joining the Indian Army. He courageously volunteered to participate in the Kargil war. At times, he endured more than sixty hours without food or water in the cold. During the war, he took initiative to attack on a bunker occupied by the enemy.
This caused him to become severely injured by a grenade that injured both of his legs. Since then, he suffers from partial paralysis in the left leg and a shortening of his right leg. After 21 months of hospitalization and 8 surgeries he was declared medically unfit to serve in army and removed from army. For his bravery shown during the Kargil war, Naveen Nagappa he was awarded Sena Medal (Gallantry).