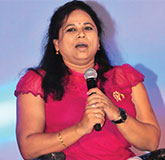 Malathi Holla is an international Para athlete from India. She has won over 300 sporting medals, an Arjuna award and the Padma Shri award. She took up sport to do something different in life. Being different herself, she knew that this was the only way to set an example for those who also face differences.
Malathi works as a Manager with Syndicate Bank and shelters 16 children with various disabilities at Mathru Foundation - a charitable trust formed along with her friends. She focuses mainly on polio victims from rural areas, whose parents cannot afford to send their child to school or provide medical treatment. Malathi Holla released her first authorized biography A Different Spirit on July 8, 2009.